The Music At Sea group relax outside the music room at Chateau De Berne, France 2005

Do you enjoy classical music - with the occasional lighter item also included?

Do you enjoy cruising?

If the answer to both the above is “YES” then this could be the PERFECT vacation experience for YOU!

This unique cruise programme was founded by Brooks Aehron in 2000 to cater for the growing band of people who, enjoying both classical music and luxury cruising, wish to combine the experience. Aimed at 'music lovers' rather than 'music specialists' “Music At Sea” is frequently described as a convivial gathering of like-minded friends.  In addition to the full amenities of the vessel provided by the cruise operator, the guests participating in “Music At Sea” have a programme of events designed exclusively for them and NOT available to the other passengers. These include a series of private onboard concerts and a specifically themed “Music At Sea Surprise” shore excursion. This has become one of the highlights. Past 'Surprises' have included a guided tour and wine tasting at Chateau de Berne, France, followed by a concert in the owner's private rooms. In St. Petersburg, Russia a private concert in the personal apartment of the great composer Rimsky Korsakoff followed by a Russian banquet at the legendary Demidov restaurant, in Norway a visit to Edvard Grieg's home - 'Troldhaugen' - where Brooks gave a private performance for the group on the hallowed musician’s treasured Steinway piano and in England where Music at Sea held a tenth anniversary celebration concert and reception at Grim’s Dyke, the former home of Sir W. S. Gilbert of Gilbert and Sullivan fame

All ships used by “Music At Sea” are known to us, carefully vetted and personally selected.

Two Choices which can be taken seperately or combined for an extraordinary back-to-back 21 day experience!

Our 2018 Music at Sea (MAS) starts with 2-nights in Brooks’ London including the Doubletree Westminster hotel with buffet breakfast, a concert by Brooks at an historic london venue, and transfers from there to the pier.  The 2-nt London package is followed by an 11-night cruise on the newly refurbished Azamara Journey from Tower Bridge in London to Lisbon, Portugal.   We start by cruising down the River Thames en route to the beautiful and world famous Bordeaux, France, for 3 days in this lovely area with castles, wineries, medieval towns, and gorgeous countryside.  The second port is St. Jean de Luz in France where you can visit the famous seaside of Biarritz and see the astounding palace Napoleon III’s wife built there.  Bilbao, Spain, is next with the world famous Guggenheim Museum and then we head to Gijon, Spain, for the famous Crafts Market and many outstanding bakeries.  La Coruna, Spain, follows (with the Roman Tower of Hercules, a UNESCO World Heritage Site), and then we head to lovely Porto, Portugal, and end with an overnight in historic Lisbon, Portugal – one of the oldest cities in the world.

•     2-night pre-cruise package in London, including the Doubletree Westminster Hotel within walking distance of Big Ben, Westminster Abbey, and Houses of Parliament.  Includes buffet breakfast.  Brooks will perform a special concert for MAS guests at his alma mater, the Royal College of Music.

•     11-night cruise on the 700 passenger 30,000 ton Azamara Journey, one of the most highly rated and popular ships we’ve ever taken.  Everyone loves the small size, open seating, great food and service.

•     Two private concerts from Brooks aboard the Journey.

•     Dining with Brooks once during the cruise

•     Coffee get-togethers with Brooks during the cruise

This offers you a chance for a 21-day Music at Sea vacation with more Brooks, more concerts, more ports

and only one roundtrip flight.

If the echoes of flamenco coming from a maze of medieval alleyways sound romantic, this may be your voyage. First, depart from the city of Lisbon, one of the oldest cities in the world, now home to a thriving cultural calendar.

First stop Cadiz, port for Seville. Tour the port area or head for the  historic Centro to see the enormous Seville Cathedral with its vast retablo, just refurbished in 2014. There’s time for the even more enormous Alcázar (fortress) complex with the Mudéjar Palace where the King and Queen of Spain stay when they’re here. And, because the ship stays late, there’s time to see the real Seville – the one that only gets going after dark.

Our next stop is Gibraltar on the Southern-most tip of Spain.  Tour the famous “Rock of Gibraltar” and the old fortress built into the rock. Occupants of this peninsula have guarded this narrow entrance to the Mediterranean Sea for centuries.  Today it is a British Territory.

We’ll have an overnight on the famed island of Ibiza, famed in part because of its nightlife. So after a day on the spectacular beaches, walking in the rustic hills or diving in the crystal-clear waters, it’s fun to venture out.

Finally, there’s Valencia. Contrast the Gothic palaces of the beautiful old city with the unbelievable modern City of Arts and Sciences, designed by renowned architect Santiago Calatrava and set in a sunken park. In the evening, watch the sunset from a wooden boat tour of the wetlands of the Albufera Natural Park. End the stay with authentic paella, Valencia’s most famous dish.

Your voyage ends with an overnight in Barcelona, but you may want to extend your stay by a day or two in this fascinating city.  Dine, shop, explore or finally get to take in that Flamenco show; it’s one of the Cruise Global, Connect LocalSM shore excursions options, a new feature of Azamara.

·        Two private concerts from Brooks aboard the Journey.

·        AzAmazing Evening in Valencia at the City of Arts & Sciences for an amazing music and light show with dancers and acrobats plus the incredible Hemisferic building.

·        Dining with Brooks once during this cruise segment

·        Coffee get-togethers, meetings and a cocktail party with Brooks during the cruise

Read Brooks ‘Blogs’, access up to date information and learn the latest news on our current sensational 2016 Music At Sea offerings 24/7 on the dedicated website: 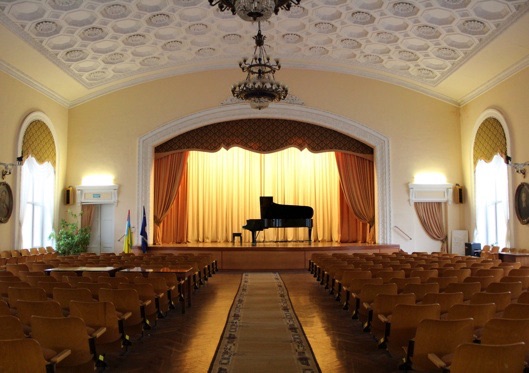 The Concert Hall at the Stolyarsky School, Odessa awaiting us in 2013 (Photo: David Hanna)

Brooks shares a joke with the MAS group at the Parry Rooms,  Royal College of Music - Yes, that IS the Royal Albert Hall visible through the window! 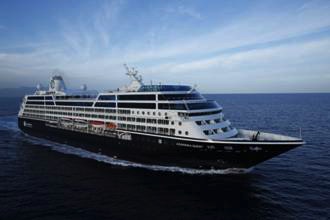 "Brooks, From the first phone call from John and Rosemary to the last warm Good Bye it has been a gem in our hearts and memories. No recommendations or suggestions are needed. Thanks for allowing us to be a part of an extraordinairy experience.

Auf Wiedersehen, until we meet again.

(extract from a letter written by a Music At Sea guest)