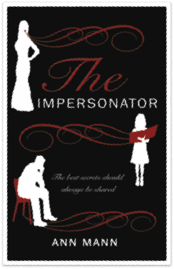 The writer Ann Mann is married to Brooks Aehron

“The Impersonator” is her latest book and is available worldwide in Hardback, Softback and eBook formats.

Why Ann wrote this book:

Inspired by the cabaret scene in London’s Soho in the ‘sixties, this story is different because it captures the essence of lost innocence whilst set against the background of change both in the UK and the unrecognised Southern African state of Rhodesia (now Zimbabwe) just before Ian Smith illegally cut its ties with the British crown.

In London if you were gay, you hid it. If you worked in show-business you found hiding it almost impossible and faced imprisonment and disgrace. This is a story which teenage girls today would find fascinating simply because of the differences between then and now in terms of freedom. Homosexuals who appreciate that freedom would take pause to reflect on what their lives would have been like then, and women who were young in the ‘sixties would find it nostalgic and emotive.

And everyone who has loved too well but not wisely will be touched by its raw honesty.

The story tells of sexual obsession in the ‘sixties, when two members of a family become hopelessly infatuated with the same person.

Fifteen year old Elizabeth Tarrant is suddenly orphaned in Rhodesia and from then on her life changes dramatically. Bound to live with her uncle, a virtual stranger, in London, she embraces the change, but her vulnerability together with the physical confusion of adolescence, compels her to lead her life through an elaborate maze of plots and schemes after she meets ‘The Impersonator’

For Jack Merrick, forty-two years old and homosexual, this unexpected upheaval brings its own problems. As a top theatrical agent and impresario, he is now forced to care for his late sister’s child, and while he tries unsuccessfully to put his personal life on hold, he is led towards a downward spiral of depression. In an era when free love was practiced with innocence and a single flower became a symbol for peace, censorship and prejudice condoned by those in authority caused misery to thousands like Jack. For the young girl who believes she is in love, innocence is replaced by a carnal worldliness which she will carry with her forever.

Intense and passionate, “The Impersonator” describes the extremes of joy, despair and violence towards which love can push us.

“The Impersonator is a terrific read. Compelling characters, a dazzling show-business background, powerful emotions running wild, lots of sex and a brilliant twist at the end. Then, when you really think it's all over, an Epilogue showing that it really isn't. What's not to love?”

Pauline Collins, Oscar nominated actress and TV star (“Shirley Valentine” and “Upstairs, Downstairs”): “A feast of surprises... Fascinating characters and a story with a powerful view of love and sex. I couldn't put it down.”

Ann Mann has enjoyed an eclectic career in show business and the media. As a singer, she made numerous broadcasts on television and radio in the ‘sixties and also performed in some of the top cabaret spots in the West End of London (an inspiration for this novel).

She has produced and presented over a hundred programmes for television and radio,

worked for Walt Disney and Hammer Films and lectured on the QE.2 liner on musical theatre and Irish Literature. She has also written articles and reviews for major newspapers and other publications, plus co-written a book on the voice.  Currently she is working on a film screenplay.

To purchase “The Impersonator” and have it mailed to your home NOW - please click on either of the following links:

When you purchase on Amazon you also have the opportunity to write a personal review!